“The play that makes French a cool language to learn!”

“L’Amour est bizarre!” is a funky, music-filled play about friendship, fame and travelling. Students also have the opportunity to join actors on stage for a sing-along at the end of the show.

The play is suitable for Years 5 to 10 French students, combining a bilingual script with original French rock songs.

“The best TIE show I have ever seen!”

A perfect introduction to French and guaranteed to put a smile on every face!

Sylvie and Christophe are buddies, only Christophe wants more. Sylvie is in love with a French rock star named Etienne, and with Christophe’s help manages to win a ticket to his concert at the Paris ‘Bercy.’ A lost wallet, a stolen scientific invention, and a motor bike escapade help Sylvie to find out what she really values. 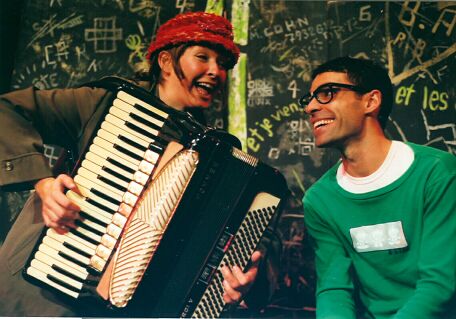 We have incorporated the following topics in our script and resource kit:

See the Info For Schools for booking information, or e-mail:
theatrelote (at) optusnet.com.au