La Princesse et la Révolution, the second collaborative work by Louise Hall: writer/producer/composer/performer, and Kerry Casey: co-writer/director (and now performer), for Theatre LOTE Fantastique!  (and the fourth of the company’s 6 original works) is an epic in miniature. Their first collaboration, the 2002 Frater Award winning Le Bossu was an original adaptation, for two travelling performers, of Victor Hugo’s epic novel Notre Dame de Paris, - a story with a cast of thousands played by two players . Both works develop Louise Hall’s unique bilingual music theatre works: 1 Italian, 1 German, 4 French with an Italian and a Japanese work in planning; and Kerry Casey’s original works of physical, fantastical, epic narratives: Pierrot and the Detective, The Men Who Stole the Sky and Homer Rules. 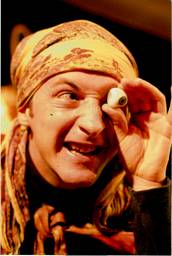 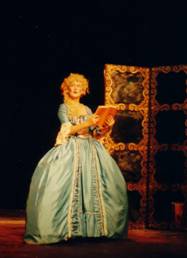 Set, in both 1805 and now, in the travelling roadshow of Madame Tussaud and Son, La Princesse et la Révolution tells the story of Marie Antoinette and the French Revolution. Inspired by the ‘embedded journalists’ of the Iraq War, and Princess Di as the archetypal princess, the play uses  Mme. Tussaud, who created her empire from death masks of the leading personalities of the French Revolution, to explore notions of the artist as witness, the cult of celebrity with the emergence of civil society,  notions of ownership of identity and truth, the birth of History and the emergence of the modernity.

Tussaud, the show-woman of the macabre, played by Kerry Casey (who plays another dozen characters in a virtuoso performance of quick change and acting dexterity), invites, through song, storytelling and dramatic scenes, the audience into her world of the living dead and tells the story of the Revolution through her relationship with Marie Antoinette, played by Louise Hall, ‘the one whose face I will never exhibit.’  In this world, wax figures, diaromas in the exhibition whose subject is the spectacle of History, come to life as Tussaud, the storyteller, conjures up scenes which come to life and are  played for real in the style of grotesque realism.

We meet not only Marie Antoinette and Madame Tussaud, but also Louis XVI, Robespierre, Princesse de Lamballe, Count Mercy, Austrian Ambassador to Versailles, Count Axel Ferson, M. Leonard, designer to the Queen, maids, royals and revolutionaries. We see the court and a well meaning but ineffectual king, the growing discontent of the people, the emergence of the Third Estate, the Tennis Court Oath, the fall of the Bastille, the confinement of the royals at the Tuilleries in Paris, the failed Flight to Varennes and Antoinette’s final moments.

Using original song and music (crossing the contemporary of today - hip hop and house - with Gluck and Vivaldi), original and found text, spoken and sung in both English and French and a rich physical acting and scenic vocabulary drawn from mime, Commedia del Arte, Noh and biomechanics, La Princesse et la Révolution presents the grotesque panorama of the end of one world and the bloody birth of the next. At the same time, it tells of human relationships and the struggle of one woman, La Princesse, to become a Queen.

Designed and built by the late Ian Bowie, the set of La Princesse et la Révolution. is easily portable (can be packed into a van and set up by the 2 actors); flexible in it’s scenic adaptability yet, nevertheless, rich enough to suggest Tussaud’s travelling exhibition with it cabinet of death’s heads  and body parts, the sumptuous palaces of Versailles and the Tuilleries, the streets of Paris, and numerous other scenes.

La Princesse et la Révolution  is the work of two artists at the height  of their powers who own the show totally and move audiences rapidly from laughter to tears at the same time as making them think and recognize themselves in this distorted mirror of our own time. As a work of bilingual theatre, it transcends both languages through a musically rich, visually sumptuous and physically articulate dramatic presentation that embodies the very contemporary notion of the vulnerable body in a time of Terror. 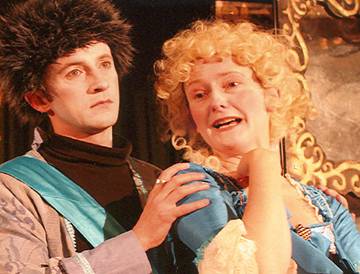 Count Axel Ferson and the Queen

"Precise story-telling of this exciting piece of history"  PIC-NEWS, August, 2003

"Most impressive. Your research was superb....the balance of French and English was perfectly pitched...."

See the Info For Schools for booking information, or e-mail: Louise Hall,
theatrelote (at) optusnet.com.au